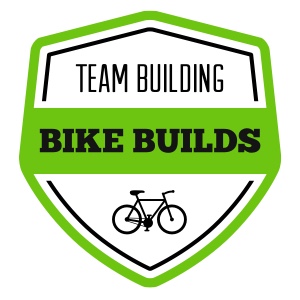 In 2021 Kids Bike Lane partnered with two corporations to conduct Team Building Bike Builds (TBBB), Haskell Company in Livermore and Silk Road Medical in Sunnyvale. In the two TBBBs there were 13 and 16 employees who assembled 15 bikes. To facilitate team building, the employees are divided into teams of three each and then to receive parts for their first bike they have several tasks to accomplish. First, they imagine they are a bike shop and decide on a name for the bike shop in order to receive the handlebars. Their second task is to create a poster advertising their bike shop, and they receive the seat. Next, with pipe cleaners they create a bike with a rider that must stand up, and they receive the pedals. Finally, they create a commercial for their bike shop that they will act out at the end, and they receive the frame of the bike, followed by assembling the bike. After assembling one bike they proceed to assembling two more bikes.

Kids Bike Lane provides the new bikes in boxes, tools for assembling the bikes, all the supplies for the activities, a bike mechanic to check each bike, and a means for transporting the boxes to the site and delivering them to a charity. The company provides the employees, a space for assembling bikes, a means for disposing of the cardboard, payment for the bikes, and a donation for each employee who participates.

We would love to receive leads to contact for planning future Team Building Bike Builds. Send us a message in the “Contact” link on the home page.

Sign up to our newsletter and we’ll keep you posted with news and events!