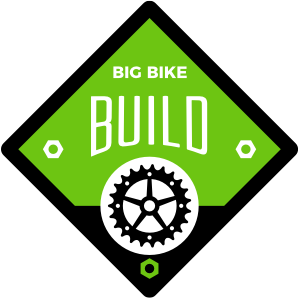 On Saturday, December 4, 2021, Kids Bike Lane conducted its sixth annual Big Bike Build at the Alameda County Fairgrounds in Pleasanton. This year we assembled 600 bikes that were distributed to 21 charities in Alameda and Contra Costa Counties.

Planning for the Big Bike Build began in May when we placed our order for the 600 bikes with Dynacraft Corporation. Because of supply chain issues we were anxious about whether the bikes would be delivered on time. So, we all were very relieved when notice of shipment was received in mid-November and the bikes arrived the week before the Big Bike Build.

As you can see in one of the photos above, the 600 bikes arrived in wrapped bundles on pallets.  The Fairgrounds provided 100 tables and 200 chairs on pallets. On Friday afternoon two groups of high school volunteers from Young Men’s Service League arrived to unpack the bike boxes, set up tables and chairs for the assembly teams and in another building for lunch, and assist with preparing the space for 275 volunteers who would arrive on Saturday morning to begin assembling the bikes.

As you can see by the photos scrolling across the top of this page, we followed the County safety protocols with volunteers all wearing masks, keeping some distance from one another, and working in small teams, family groups, and social bubbles. It was a nice day so many teams moved outside to assemble their bikes.

Kids Bike Lane appreciates very much the contributions of the following for making the 2021 Big Bike Build such a success.

We look forward to the seventh annual Big Bike Build on December 3, 2022. Be sure you are on our mailing list so you will receive notice of registration if you would like to be part of the event.

Sign up to our newsletter and we’ll keep you posted with news and events!